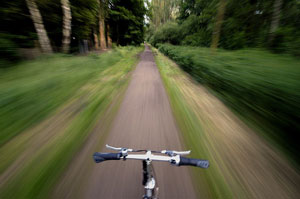 Previously I’ve introduced the concept of the Exposure
Triangle as a way of thinking about getting out of Auto Mode and
exploring the idea of manually adjusting the exposure of your shots.

The three main areas that you can adjust are ISO, Aperture and Shutter
speed.

I’ve previously
looked at making adjustments to ISO and now want to turn our
attention to shutter speed.

What is Shutter Speed?

As I’ve written elsewhere, defined most basically – shutter
speed is ‘the amount of time that the shutter is open’.

Let me attempt to break down the topic of “Shutter Speed” into some
bite sized pieces that should help digital camera owners trying to get
their head around shutter speed: Shutter Speed – Bringing it Together

Remember that thinking about Shutter Speed in isolation from the
other two elements of the Exposure Triangle (aperture and ISO) is not
really a good idea. As you change shutter speed you’ll need to change
one or both of the other elements to compensate for it.

For example if you speed up your shutter speed one stop (for example
from 1/125th to 1/250th) you’re effectively letting half as much light
into your camera. To compensate for this you’ll probably need to
increase your aperture one stop (for example from f16 to f11). The
other alternative would be to choose a faster ISO rating (you might
want to move from ISO 100 to ISO 400 for example).

I’ll write more on bringing it together once I’ve written a post in
the coming week on the last element of the Exposure Triangle – Aperture.

Update: Want more control of your Digital Camera?
Check out our eBook Photo Nuts
and Bolts: Know Your Camera and Take Better Photos.